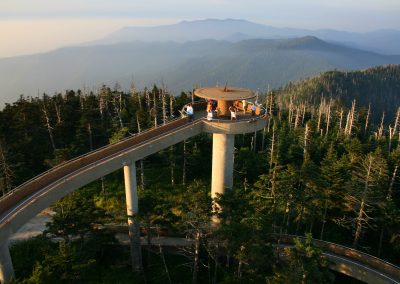 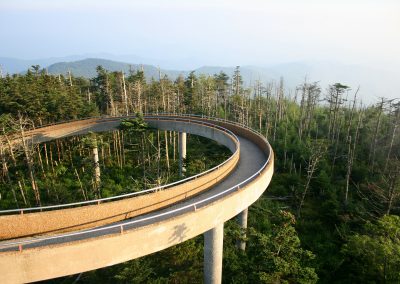 The Clingman’s Dome Overlook was one of the first highly visable projects developed by Mr. Hubert Bebb – the founder of the firm – in the East Tennessee area. Its unique spiral ramp design was in direct response to the need for convenient pedestrian access to the tower. In addition, spectacular panoramic views of the Great Smoky Mountains National Park at all times of the year become part of the journey to the top. The design provides accessibility for the handicapped predating today’s required standards by over thirty years.

The building of the overlook was as unique as the design. The document package included sections devoted to the construction of the concrete form work which had to conform to irregular topography, be reusable in sections, and be built of material which could be hand carried to the site.

A small concrete plant was put into operation on the top of the mountain because transportation of pre-mixed concrete over the existing roads was impossible. The concrete was then hauled to the overlook by a small tractor-driven cart. As sections of the ramp were finished, the forms were moved forward and the ramp itself became the work platform for the placement of the next batch of concrete.

As a footnote, Mr. Bebb’s ashes were scattered to the winds from the top of the tower after his death in 1984.